The Dutch capital has become an example of sustainable mobility thanks to the numerous cycling routes that cross the city everywhere.

Is there anything better than a bicycle to help us navigate city centres, providing a satisfying sense of physical and mental wellbeing, combining physical activity and eco-friendly habits in one happy package?

This opinion is shared across cities, including in Amsterdam.

For decades, the Dutch capital has been referred to as a symbol of alternative mobility and as an example to follow, even if in reality, its citizens don’t experience it as alternative. It’s simply a habit.

What might seem to be a sort of positive tradition is actually strongly influenced by the political and administrative decisions of the local government, which aims to make Amsterdam a champion of the energy transition.

A bicycle for everyone

To start, the city has more than 850,000 bicycles in circulation, with the largest amount of bicycle lanes in any city in the world. Over time, the city’s government has banned fossil fuel-powered vehicles, whether car, motorbike or bus. Simultaneously, especially in recent years, there has been an attempt to incentivise the use of electric vehicles by building infrastructure for recharging stations throughout the city and experimenting with new technologies, such as the Moet Je Watt (MJW) system, which is an electric vehicle charging station with a smart meter that prevents power waste and overcharging.

In an interview from last autumn in Forbes, Sharon Dijksma, Amsterdam’s traffic and transport councillor, stated, “Parked cars occupy 11% of the space in our city. This is a large problem if we consider that Amsterdam is a city that will grow. Additionally, many are parked for almost the entire day, and more than 40% go unused. We surely have to rethink these spaces and find an alternative solution. Our proposal is to further spread the concept of smart mobility by expanding park and ride facilities and using lighter and more sustainable vehicles in the city”.

Collaboration of institutions, companies and citizens

This is a clear approach that reflects the provisions set out by Vision 2025, a document that describes a redesign of the city’s future through solutions aimed at reducing energy waste and emissions of pollutants, creating an environment and economy that meets the needs of residents and businesses, and reduces municipal spending.

Launched in 2009 by the council in cooperation with Liander (energy) and KPN (telecommunications), the Amsterdam Smart City plan is a virtuous example of a public–private partnership. In 2007, the council launched the Amsterdam Initiative against Malnutrition (AIM), which, two years later, was absorbed into the ASC project and gathered more than 70 partners, including private companies, institutions, research institutes and citizens in order to create a shared development plan in the areas of digitalisation, energy, mobility, circular economy, liveability and public services. The stated goal was to reduce CO2 emissions by 40% by 2025.

Amsterdam Smart City received the support of the EU, which financed the first three years and remained a continuous partner of the project. Its cornerstones, the energy transition and open connectivity, are the same conditions highlighted in the EU’s Smart Cities plan. Specifically, the ASC project aims to transform the urban area into a sort of widespread incubator for innovative products and services in synergy with needs of citizens. Its uniqueness lies in the fact that its development and investment guidelines are not set in stone; instead, they are periodically updated to incorporate new proposals and needs. In 2018, more than 230 potentially green projects were tested.

Among these was the Groen Grachten project (literally, green canals), which aims to renovate old buildings along the canals to make them more energy efficient without impacting the city’s architectural heritage. Because of this, De Groene Bocht (the centre for the support and development of employment and sustainable business) moved into a seventeenth century building and was able to cut CO2 emissions in half by using fuel cells, allowing the building to have its own electricity source.

Structural works have also allowed neighbourhoods like Nieuw West and Geuzenveld to become models for experimentation. In the former, around 10,000 resident families were able to sign up for the new smart grid by Alliander, who is the Netherlands's main energy operator, and reduce their bills by using the latest generation meters and the highest concentration of solar panels in the city.

In Geuzenveld as well, more than 500 private homes installed new innovative meters which allow tenants to monitor their energy use using a display that is updated in real time.

In order to share advancements and achievements with citizens, it is also important to show progress. Because of this, Klimaatstraat, a type of showroom where the most innovative and environmentally sustainable technologies are tested, was opened in the Utrechtsestraat business district.

Amsterdam, which has taken on the nickname of World’s first doughnut in reference to its round shape, aims to become the world’s first fully circular economy by 2050, halve its use of raw materials by 2030, and reduce its greenhouse gas emissions by 55% from 1990 levels by 2030 and by 75% by 2040.

Demographic forecasts, however, foreshadow some complications as regards these goals: it is estimated that the Dutch capital will reach a population of one million by 2040, up from its 800,000 today, with a consequent increase in housing and tourist lev-ls and an increase in travel to and from the city by 30%. Because of this, it is important to act today, to plan and implement change so as to avoid being caught off guard and then forced to rush to keep up.

Amsterdam Smart City is the name coined by the local administrators to underline the importance of new technologies in this epic challenge.

So far the numbers seem to be on their side, with the city firmly in the top ten of the City in Motion Index from the University of Navarra Business School; it has 1.1 innovative start-ups for every 1,000 residents, according to the latest report published by Dealroom, making it first among all European countries, with a growth of 700% in the last five years; it has one of the most far reaching 4G networks in Europe, and it recently auctioned off frequencies for its own 5G network, for a record sum of €1.23 billion.

In terms of global rankings and university and research institute indices, Amsterdam is the beacon for all the cities of the planet.

Graduated in European Literature at the University La Sapienza of Rome, he is a freelance journalist and editorial translator, he has collaborated in several cultural and artistic projects as an author and writer. He currently collaborates with Media Duemila, Lonely Planet as an author and with Elliot Publishing. 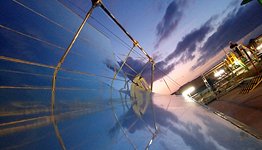